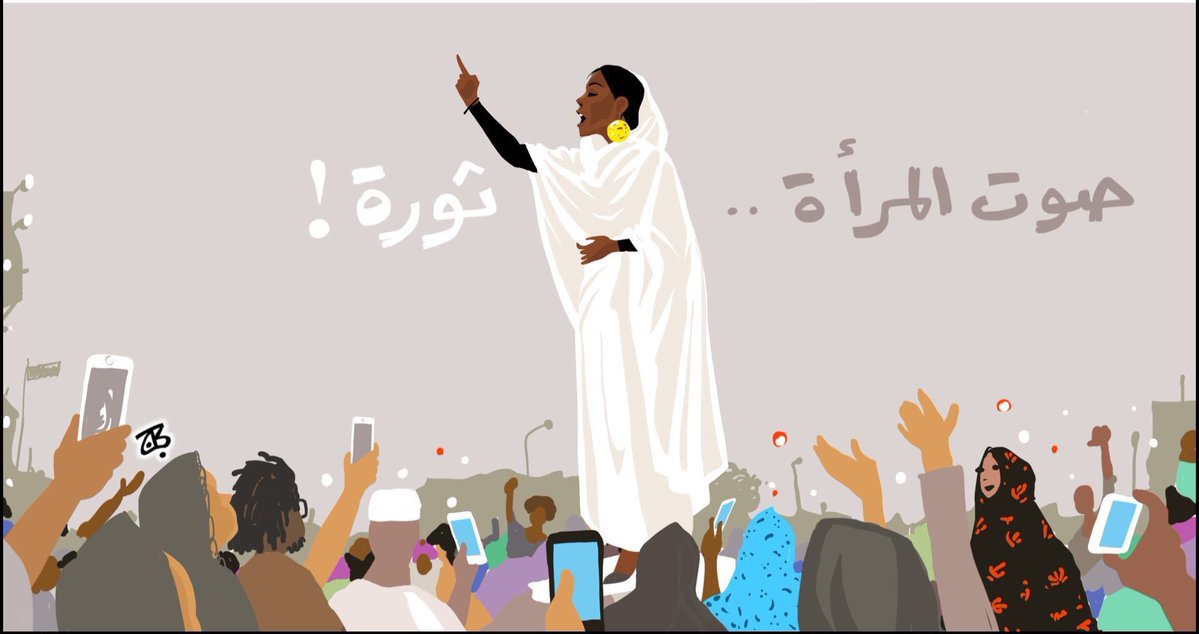 Sudan is passing through a revolutionary crisis. The class struggle is sharpening, the lines are redrawn every day with the development and clashes of class interests. Still the balance of forces on the ground is in favor of advancing the mass uprising to reach its final goals. It is an arduous struggle which will continue to dismantle the institutions of the regime, but it is possible.

Why did the protests, that have been going on for a long period in Sudan, start? And what is the central reason for the protests to continue for so long?

Like nearly all previous protest movements in the country, the Sudanese masses were protesting the bankrupt economic policies of the Muslim Brotherhood’s dictatorial regime as demanded by the World Bank and the IMF, in a more intense and organized manner since 2013. However since then the SCP (Sudanese Communist Party) and other democratic forces made efforts to strengthen the professional bodies, as an alternative to the regimes dominated undemocratic trade unions. These efforts, together with the building of resistance committees, have contributed to create a loose network, a kind of leadership on the local basis in the residential areas, workplaces, and in the institutions of higher learning. Thus, when the SCP branch in the capital called for a peaceful demonstration against the rising prices of basic needs like food, petrol, transportation fares and medicines, the participants followed the call, but soon the slogans turned from economic demands to political expressions: calling for the over throw of the regime. The situation in the country is unfolding since January 2018, and the streets of the capital and other major cities were the scenes of  confrontation against security forces became daily episodes till the explosion of the national uprising  in December 2018.

Women appear to be a major force in the protests. What are the factors for women to be such a fundamental element of the protests?

The Sudanese women were double victims of the Muslim Brotherhood policies. They suffered, like all citizens, from the bankrupt policies of the regime. But they were also targeted by the regime through different laws  under the Islamic cloak, to deprive the Sudanese women of their rights, hard-won since the independence of the country in 1956. Apart from forbidding women work in a number of professions, like the judiciary, laws were introduced to give the police special powers to forbid women from traveling unless escorted by a male relative, laws imposing regulation on how women were to dress or walk in the street. All in all women in Sudan became third class citizens. That explains the active participation of the Sudanese women in all protest actions. They were at the forefront of the December uprising, not only in the cities but also in the country side. Women participation in the mass demonstration reached the level of 68%.They were to wrench their rights. Today all the Sudanese opposition forces recognize the role of women .It is expected that the representation of women the future in all governmental levels will be 40%.

Suffice to say that the SCP has recognized the role of women the general struggle of our peoples for national and social liberation. Today women comrades are represented at the Central Committee of the SCP by 12 members out of 40, and by three members in the Politburo out 14.

How to you evaluate the agreement of the Military Council and the Forces for Freedom and Change?

First, I must stress that the mass uprising in the Sudan and the protest movement has reached a very high level of political struggle. The objective conditions are ripe for radical change. However, due to certain conditions, the subjective factor is still maturing. I can say that, despite the great influence of the SCP political line on the mass movement, that has not yet been coupled with organizational influence. The present leadership of the opposition includes different political and ideological forces. That is why the approach towards the question of power, alliances and the distribution of wealth is far from being resolved. This being said, it must be stated that the mass movement has achieved a number of outstanding victories since the 19th of December. That is why the present political agreement and the constitutional document agreed upon represent a kind of a setback, since both documents do not reflect either the aspirations and demands of the masses or what had been agreed upon in the Declaration of the Freedom and Change Alliance.

The SCP will continue the fight till the complete and total overthrow of the regime, its dismantling and liquidation.

Is it possible to entertain steps towards doing away with the regime and institutions of Omar al-Bashir?

As stated in our answer to question three, the fight is still going on. There is a long way to go to reach the objectives and goals of the revolution. Sudan is passing through a revolutionary crisis. The class struggle is sharpening, the lines are redrawn every day with the development and clashes of class interests. Still the balance of forces on the ground is in favor of advancing the mass uprising to reach its final goals. It is an arduous struggle which will continue to dismantle the institutions of the regime, but it is possible. As the mass protest and revolutionary process advance, the counter-revolution, internally, regionally and internationally is gathering their strengths to defeat and abort the revolution. They have a project of  a “soft landing” to sow division within the ranks of the opposition and to attract certain sections from the opposition whose class interests coincide with that of the regime and big capital, with the aim of enlarging the social base of the regime.

Taking all these elements into account, the SCP believes that the path to total victory is possible.

The Sudanese Communist Party declared that it will not take part in the transition process. What does the SCP aim at during this process?

In all its declarations the SCP has always stated its aim to struggle to topple the dictatorial regime and to build a democratic alternative that paves the way for the completion of the tasks of the national democratic revolution and the building of socialism. Removing the al-Bashir is a step in that direction. However the main tasks are still ahead.

For the SCP, rebuilding the strategic alliance is of paramount importance. Mobilizing, organizing and preparing the working class to lead that alliance is an immediate objective. It is around this strategic alliance the broad mass front  composed of all the democratic and patriotic forces- will assume its role in the revolutionary process this way that under the leadership of the working class and its party. It is only through this way that the toiling masses will defeat the counter revolution and proceed along the path of radical political and social changes. These are our tasks at the present.

What is the position of the participants in the protests towards the war in Yemen?

The position of the Freedom and Change Alliance as embodied in its declaration of principles is very clear on the Saudi-led invasion of Yemen. It condemns the Saudis and their allies, calls for the immediate pull-out of the Sudanese troops and the withdrawal of all foreign troops from Yemen as well as a peaceful settlement in that country.

However with the interventionist policies of both Saudi Arabia and the United Arabic Emirates in the internal affairs of Sudan, some forces within the Alliance started to waver and retreat from the declared principle position. Needless to say the military junta is hundred percent in support of the war. Actually, both the chairman and his deputy were in Yemen leading the Sudanese troops there.

We have witnessed an increase in protests recently in Lebanon, Iran, Algeria, Iraq and Jordan because of economic woes. Do you think that an atmosphere is developing in the Middle East that would permit the rise of communist movements?

I think the world is witnessing new changes, gradually we are seeing an end to mono-polar domination. The emerging powers around the BRICS, as well as some other governments are seeking to find and defend their own capitalist interests. These internal contradictions may well help the struggling peoples around the world. It is true that the people of the South in general and those of Iraq, Lebanon, Jordan, Algeria, Palestine, Tunisia, and we can add Russia, Mexico among others, are fighting to demand a say in their future. The struggle may differ from one country to the other, but the salient feature is that these struggles are all linked in their goal of being against capitalist exploitation and for social change. The peoples struggles are asserting themselves as another force to reckon with in the international political situation. It is reminiscent of the fifties and sixties of the last century, promising a new pole emerging on the international scene.

The ongoing struggles are creating a conducive atmosphere for the growing role of the left in general and the communist parties in particular. It is left to these forces to grab and seize the opportunity and play their leading role in the struggle of their peoples. The adherence to Marxism- Leninism, the leading role of the working class and the correct strategic and tactical alliances are the key issues facing the communist movement in our world today. The more adherence to these basic principle, the more victories can be achieved. It is also important to stress the peoples in the BRICS countries, sooner rather than later will join the main stream of the struggle. The picture will be complete without building a strong combative alliance between the forces of change in the Middle East and the South in general and the working class and its parties in the capitalist countries.

The interview was done via e-mail and edited for publication.